Elvin Flamingo, PhD (Jarosław Czarnecki, PhD), as an artist working since 2008. Lecturer at the Faculty of Sculpture and Intermedia of the Academy of Fine Arts in Gdańsk, Poland. Associate Dean of Intermedia (2016-2019).

His projects combine art, biology, and technology (bioart, art&science). By far Elvin Flamingo’s most important project is The Symbiosity of Creation VOL.1. The work begun in 2012 and is envisaged to continue until 2034. The work’s point of departure is cultivation of exotic ants. It consists of three parts invoking the themes of destruction and re-creation. The respective elements of the work are as follows: Reconstruction of Non-Human Culture, Kingdom of the Shared Quotidian and After Humans, the Biocorporation. The work was nominated for Poland’s Prime Minister award for the arts. It was also the topic of Elvin Flamingo’s doctoral thesis, defended in 2014. The Symbiosity of Creation received wide coverage in the country of Poland and abroad. The work won Critic’s Award at the Media Art Biennale WRO: Test Exposure, Wrocław, Poland, in 2015.

1. The Symbiocity of the Land of Opportunities

Two masterpieces of film art by the Danish director Lars von Trier Dogville and Manderlay were one of the inspirations for the project of two incubators set up in line with the idea of the symbiocity of creation, so that the set of the former (Dogville) might include 21 spaces, and the set of the latter (Manderlay) might comprise 6 such spaces, a total of 27 separate habitats for 27 separate colonies of Symsagittifera roscoffensis3. The insides of the two spaces, cooled down to the temperature of 14°C, with a total size of 0.5 m³, were prepared with a view to triggering unique “scenes” (in each vessel) that would help to study both social movement of non-human organisms, an uncanny merger of a plant and an animal and their interdependencies, how humans (us) impact them, ensuring them the best possible care and attempting to create perfect habitats. Furthermore, they would facilitate another way of scientific study, merging science and art with the unique in the non-human body. The person who carries out this research and ensures that the correct narrative is perpetuated is Eugene Rossenth, a woman scientist and idealist in the field of biology and psychology (Elvin Flamingo’s alter ego). However, it is not obvious that Rossenth will succeed in the role and handle it properly. Rossenth is a conversion to the character of Grace present in both of the previously cited films. Inspired by the USA—Land of Opportunities trilogy, we come up with our own interpretation and a conversion of a narrative, an attempted collaboration of a Symsagittifera and Platymonas colonies (instead of human communities), with the actant Eugene Rossenth (replacing the idealist Grace). The film Washington was to have been the third part of von Trier’s trilogy. Of course, the attempt to translate the non-existent part of von Trier’s trilogy into the processual creation of the science and art project in question is only semantic and in no way a burden on either party. It will be an attempt to observe how the creators of a similar rank of activities, i.e. the superorganism Symsagittifera and Eugene Rossenth, will enable and facilitate each other’s work on their dependencies and interconnections: between Rossenth (Grace) and entire plant-animal communities (inhabitants of Dogville and Manderlay). The third part of the trilogy and the third part of the Symbioticity of Creation is therefore a research project conducted by biologist Eugene Rossenth, in collaboration with and under the watchful eye of Elvin Flamingo, the author of the idea of symbicioty of creation and co-author of the Plant~Animals ~ The Symbiocity of Creation project. Ultimately, inspired in a theatrical, visionary and semantic way by the USA—Land of Opportunities trilogy are two sets with special spaces for 60 colonies of Symsagittifera roscoffensis. Here Rossenth is faced with a huge challenge, as she is ultimately to be praised for the success and chastised for the fiasco of a given project. Neither the scenario of the work nor the research schedule exist, which is significant when looking at all of Elvin Flamingo’s work to date. The term schedule is applied “only” to a great experimental frame laid out on a symbiotic realm of possibilities. It is a one-of-a-kind experiment, much in the manner of the two films by Lars von Trier: Dogville and Manderlay, which were much instrumental for the creation of a given work.

A railway station is an unusual gathering of people who make decisions about their travel; this venue changes with each passing hour. Such places are referred to non-places, where specific social relationships and types of perception can be observed2. The edge of railway stations over airports is the absolute freedom to choose the direction of travel literally up to the last minute. The person-humans/plant-animals have 100% freedom and possibility to choose which way they will head (this is where the study of the social movements of plant-animals will take place in relation to all exposed inspirations).
In nature, plant-animals known as Symsagittifera roscoffensis exist most often as moving collectives. The results of the study of the behaviour of Symsagittifera have shown that individuals, gathering in groups, can reach relative safety more quickly than those swimming freely alone. As a result, they are prepared to merge into dense groups when encountering an unexpected wave. Researchers highlight the fact that their observations are a fascinating and completely new example of so-called “safety in numbers”.
Let us come back to (human) social movements. Significantly, what can be observed at railway stations is the possibility to change one’s decision even a few seconds before the departure of the chosen/changed train (one of the authors of this text has done so several times). Using railway lines, one can follow previously unknown, even abstract networks. The choice of the Hamburg station as one of the inspirations is not only due to its grandeur and sacrosanct German precision and order of construction. It is a place where innumerable networks of railway connections, human races, people speaking different languages, poor people, rich people, smart and intelligent people, uneducated people, people acting on the spur of the moment, people affected by personality disorders, people struggling with mental illnesses, and finally scientists and artists, visionaries and prophets, believers and atheists, people capable of directing and manipulating others and people who are just pawns in the game of life, all intersect. These connotations form unusual clusters, encounters and relationships which, according to the authors of the project, have a close bearing on the discussed project Plant~Animals ~ The Symbiocity of Creation. We cherish the hope that it is these networks that justify the decision about being inspired by the Hamburg Hauptbahnhof and by the unique film sets created by Lars von Trier in his unfinished trilogy, whose title was changed here to the Symbiocity of the Land of Opportunity.
One of the research concepts considered in the field of collective movements of plant-animals is that as the density of individuals increases, a series of stages can be observed, from single polarised groups through huge “wheel mills” to static assemblies. Similar stages are also observed in humans, during panic attacks of evacuees2.

They were first described in 1910 by the English scholar Professor Frederick Keeble, who spent many summer months on the beaches near the town of Roscoff, Brittany. Keeble called them “plant-animals” […]. These flatworms of the species Symsagittifera roscoffensis owe their green colour to the tiny cells of the algae Platymonas that fill their tissues. Because Symsagittifera are transparent, the green colour of photosynthesising Platymonas cells shines through their bodies. […]. Their entire life, from birth to death, takes place inside the bodies of the flatworms and it is these bodies that produce the food that the hosts feed on. Therefore, the mouth opening in Symsagittifera becomes superfluous and in fact ceases to function once the larva has transformed into an adult. Sunlight reaches the algae, enclosed within their mobile living greenhouses and allows them to quietly produce organic matter; some of the products of photosynthesis enter the bodies of the worms, nourishing them from within. Symbiotic algae are even involved in removing the worms’ waste: they convert the uric acid they produce into useful substances for themselves. Thus, algae and flatworms together form a miniature ecosystem, submerged in water and exposed to sunlight. In fact, the relationship between the two partners is so close that only via a powerful microscope can one tell where the animal ends and the plant begins.1

4. Habitats — ideal conditions for the life of Plant-Animals 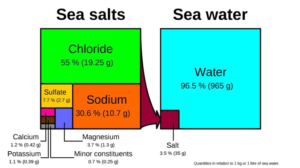 Elvin Flamingo’s insecurity in the context of Eugene Rossenth is a kind of jealousy. But the feeling is a far cry from envy; it is rather a desire for and a need to work closely with Eugene Rossenth and match her intelligence. The placement of Eugene Rossenth’s drawings on the outer and inner walls of both incubators will in time become a matter of course. Rossenth is as yet a little-known personality who, through her mere acquaintance with Elvin Flamingo, is at fast gaining recognition in many fields, including science. This all revolves around the project Plant~Animals ~ The Symbiocity of Creation. And it is in this area that disagreements occasionally arise. This project is first and foremost a research study that is not solely concerned with and does not narrow itself down to plant-animal breeding. It is an insightful scholarly work resulting from a combination of biology, psychology, technology, and art.

In this project we find novel and risky references to two experiments, by Stanley Milgram and Philip Zimbardo. The project titled Plant~Animals ~ The Symbiocity of Creation is an experiment akin as to its inspiration with a few major works seen as milestones.
Ultimately, one must recognise the results of studies on the social movements of the Symsagittifera roscoffensis. They showed that the organism, by means of circular movement, collects all individuals and eventually leads to such high densities that the plant-animals can form dense stretches and thus behave as if they were a single superorganism2.
Which they in fact are! 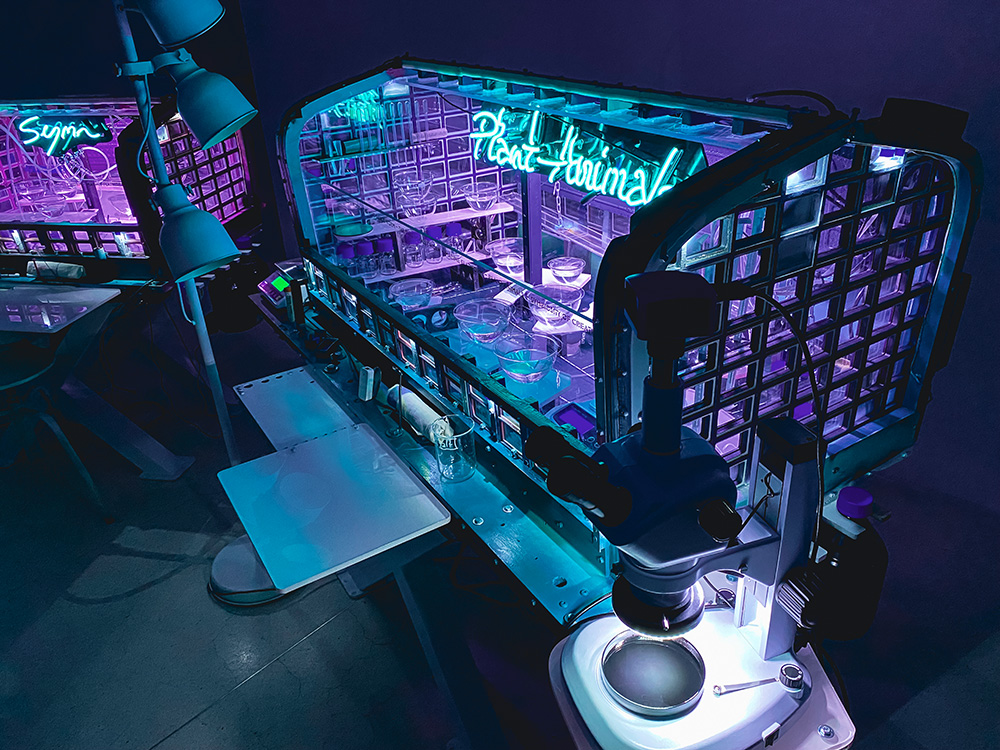 The continuation of the philosophy of symbiosity was established in 2020 as Elvin Flamingo’s art&science team cocreated with scientist Jowita Nowakowska-Gołacka. This duo have already done VOL.2 of Symbiosity of Creation titled The Language of Stray Bodies. In 2021 the duo-cooperation ended and Elvin Flamingo started to work on Plant~Animals ~ The Symbiosity of Creation in cooperation with french scientist Xavier Bailly, PhD, Head of Marine Model Organisms Team – Station Biologique de Roscoff – CNRS – Sorbonne University, Roscoff, Bretagne, France.

Elvin Flamingo is also the founder and curator of the Intercollegiate Science Club Biomedia.