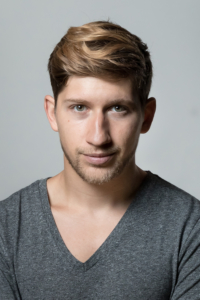 Miha Godec (1988) graduated in 2014 from the Academy of Arts of the University of Nova Gorica, and soon after began his professional career as a photographer. During his studies, he upgraded his knowledge at the Portuguese school ESAD (College of Art and Design). In addition to his photographic and artistic practices, he is also a lecturer for photography and virtual reality, while he independently conducts regular educational, scientific, and artistic workshops.

In his artistic practice Godec, who works at the intersection of art, science, and new technologies, focuses on the development of new media projects, in which he researches the consequences of anthropogenic impact on aquatic ecosystems, experimenting with water acquisition, purification and researching the sonification properties of water.

It’s surely our responsibility to do everything within our power to create a planet that provides a home not just for us, but for all life on Earth.

Roscoff project; seeing the unseen, is a bio-art installation which uses simple tools, cheap lens from a laser light and a smartphone camera, to get a better view, understanding and awareness of an unknown but a very special delicate sea worm, who is coexisting with an algae. This fascinating little creature is actually an plantanimal. In juvenile stage worms eat the algae and creates a simbiosis. It can also regenerate its head and have a primitive eyes. Roscoff worm can teach us a lot about climate change and also about self sustainability and coexistence with nature and its importance. The project developed from a BIOBOX workshop (Roscoff worm educational kit – initiation into marine biology), mentored by Robertina Sebjanic. The art installation is setup in a way that the viewer walks in front of the projector thus projecting its own shadow on the worm’s projection and in a way blends himself with the installation. The project tries to encourage the viewer to view things from a new or different perspective in order to broaden our horizons.

Roscoffs worms like many marine animals are not well prepared for the climatic changes to come in the Anthropocene era. The acidification of our oceans because of CO2 absorption is a major concern since its effects are still not fully understood. This plant-animal is doomed to be extinct in the near future. Scientists use Roscoff worms in laboratories to understand climate change and the delicate process of symbiosis. And so they try to predict the future of our coral reefs. Roscoff worms and Corals expulses its algae partner due to the stress caused by changes in temperature and acidity of the water which result is the death of the host. Symsagittifera roscoffensis, formerly called Convoluta Roscoffensis, is a free-living acoelomorph worm which is special because of its symbiosis with algae which happens in juvenile stage.

S. roscoffensis is a small, about 15 mm long, flatworm. It assimilates the algae, Tetraselmis convolutae into its parenchymal cells, giving it a green colour. For this reason, its common name in the Channel Islands is the “Mint sauce worm”. In its adult stage, the worm lives off the excesses of its symbiotic algae, although the mouth is still present it doesn’t serve its function anymore. The worm provides shelter and some nutritional benefits in return. The worm can be found in shallow water on sheltered sand beaches along most of the Atlantic Coast (including the coasts of Wales, Brittany, the north of Spain and Portugal). If the right conditions are met they can live up to 6 months in laboratories.

They also have sensory structures such as a pair of pigment cup eyes and a statocyste are connected to the worm’s primitive nerve system and facilitate 3-dimensional and light-dark orientation. They also have regeneration abilities. Roscoff worms can regenerate its head which is interesting for scientists to study and understand. The question then arises, is it still the same worm after its head is regrown?

Mentors: Robertina Šebjanič and Rene Rusjan
Produced: project is part of the masters program of School of Arts – University of Nova Gorica