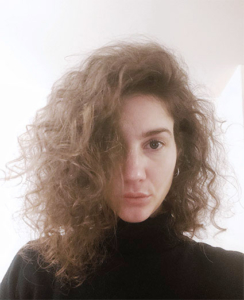 Sandra Bühler is a filmmaker and new media artist with a focus on documentary filmmaking and experimental animation. After completing her studies as graphic designer in Zurich, Switzerland, she turned towards movingimages as well as audio-visual performances and studied experimental film in Berlin, Tokyo and LA.2017 she received a Master of Fine Arts at Zurich University of the Arts.

Through experimental, essayistic, docu-fictional technics she questions the contructed „nature“ of images as well as realities in general. She likes to work on the boundaries of conceptual thoughts especially between human and nonhuman and its politics.

Hence in the last years she developed a strong interest in non-humanity, perspectivism, animism and mythology. In her practice she strives towards social-cultural exchange, sustainable interaction and close engagement with communities.

She co-created various community based art projects around the world, working with marginalized groups as well as dense nature.

A collaboration with Maya Minder’s project

Green Open Food Evolution proposes a speculative narration into possible dietary programs based on algae rich nutrition, aimed at rewriting the human holobiome so to ultimately become Homo Photosyntheticus. Scientific research has recently discovered how the intestinal microflora of Japanese people has adapted to digest Nori seaweed: a gene transfer occurred between an ancestral marine bacterium and an intestinal bacterium specific to the Japanese. Once ingested by Japanese people, marine bacteria associated with algae were then able to come into contact with intestinal bacteria and transfer their “utensils” to them.

Would our own intestinal bacteria be able to acquire the same features today as the intestinal bacteria of the Japanese if we regularly ate raw seaweed-based foods? This discovery of the “sushi factor” may be only the beginning of a wider field of investigation into the evolution of the human holobiont and its possible future.

What would happen to Homo Photosyntheticus, a sort of ultimate vegetarian who no longer eats but lives on internally produced food from his algae symbiosis? Our Homo Photosyntheticus descendants might, with time, lose their mouths, becoming translucent, slothish, and sedentary.