Roscosmoe is an art&science initiative launched in 2015 by Xavier Bailly and Ewen Chardronnet and that hosts or supports artists conducting researches in the field of marine biology & biodiversity in partnership with the Multicellular Marine Models laboratory of the Roscoff Marine Station (France).

A major thread of the initiative is the design of research protocols involving the photosymbiotic worm Symsagittifera roscoffensis as a potential biological model to apply in space research. The space mission Roscosmoe connects marine biology, space ecology, design, anthropology of science and intermedia art. 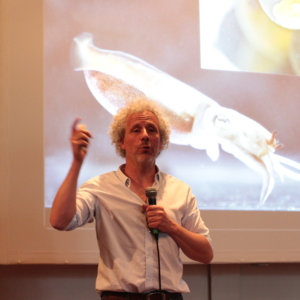 Xavier Bailly holds a PhD in molecular genetics and evolution. He is a CNRS research engineer at the Roscoff Biological Station in Brittany. He supervises and leads the M3 team (Multicellular Marine Models) at this marine biology institute. His work focuses on the control of life cycles of marine organisms in captivity. These offer the possibility of accessing all the developmental stages of a species in the laboratory: from early embryogenesis to the adult reproductive stage.

Using specific molecular genetic tools, he is supervising functional exploration work, particularly on a photosymbiotic animal, the Roscoff worm. This animal, like corals, hosts a large population of microalgae under its epidermis, whose photosynthetic activity enables them to transfer nutrients to feed the worm. For the past 15 years, XB has been exploring sustainable functional associations between the animal and the microalgae. 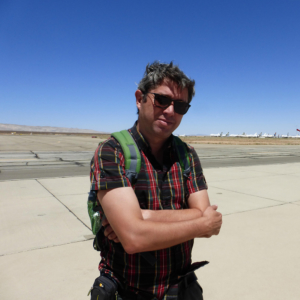 Ewen Chardronnet is an artist, author, journalist and curator. After studying journalism, he devoted himself to cultural associations and relations between arts and sciences. He participates in the collective project Association of Autonomous Astronauts and publishes in 2001 the anthology Quitter la gravité (L’éclat). In 2007 he is co-founder with Léonore Bonaccini and Xavier Fourt of the collective The Laboratory Planet and then of the associated projects Spectral Investigations Collective and Aliens in Green. Defining himself as a collective author, he has collaborated with numerous artists and is also a curator and producer in the development of intermedia, performance and investigative artworks.

In his work as an author and artist he addresses the social impact of technology, global imaginaries and the environmental crisis, the relationship between humans and non-humans, queer and maker/hacker cultures, culinary cultures and dietetics, evolutionary biology and the future of the human. He has shown his work in numerous institutions including: Centre Pompidou, Maison Européenne de la Photographie, Jeu de Paume, Belle de Mai, Fundação Serralves, PACT Zollverein, Transmediale, Berlinische Galerie, Casa Encendida, Science Gallery Dublin & London. He is the author of Mojave Epiphanie (Inculte, 2016) and intervenes as an essayist and journalist in numerous publications. He is currently editor-in-chief of Makery.info magazine.