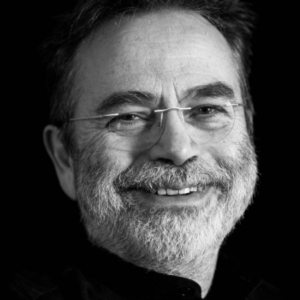 After a career working as a computer engineer in the aerospace industry, Jean-Philippe Blanchard joined the French bank Crédit Agricole. In the early 2000s, he led the bank’s technology unit to serve clients with a “design thinking” approach to digital and multi-channel projects, through open, responsible and frugal innovation. He was a member of the management, start-up selection and science committees of Technolab and Village by CA, as well as the “e-Health” think tank, and has played a mentorship role during hackathons for the CA Group.

Through 15 years of partnerships with small businesses and universities, he has:

– hosted a number of Master 2 interns in cognitive sciences, design, applied mathematics and computing;
– funded and served on the jury for 6 theses (AI applied to financial marketing, automated control, telecommunications…);
– participated in the ANR VERSO 2008 project (directed by Telecom Paris) to distribute AI services within a telecommunications network;
– led the Living Assistant Robot consortium (DGCIS e-Sante 2012) in developing a prototype ecosystem for electronic, robotic and medical services, as well as healthcare house calls for seniors, which ended in 2016.

Retired since 2017, Jean-Philippe Blanchard is actively involved in activities of the M3 research laboratory of the Biological Station in Roscoff.

This project was developed at the Plateforme C fablab with PING in Nantes and support from Fédération – Open Space Makers, CNES the M3 laboratory of the Roscoff Biological Station (CNRS – Sorbonne Universities).
OPEN 3D CLINOSTAT aims to develop an open hardware 3D clinostat—a device that simulates microgravity for studying the behavior of lifeforms in the context of aerospace research.

“The clinostat was invented in 1879 by Julius von Sachs, who built a clockwork-powered machine. However a similar concept had been pioneered as early as 1703 by Denis Dodart. The first electric-powered clinostat (1897) was made by Newcombe […]
A 3D or two-axis clinostat (generally called a random positioning machine or RPM), can average gravitational pull over all directions. These machines often consist of two frames, one positioned inside the other, each rotating independently.”
(https://en.wikipedia.org/wiki/Clinostat)

As commercial 3D clinostats are too costly for semi-professional or educational use, we launched the OPEN 3D CLINOSTAT project to propose a more accessible model that is open source and can be built from inexpensive commercial parts.

Our goal is to make the OPEN 3D CLINOSTAT kit available to Fédération – Open Space Makers, as well as to the general public under an Open Source license, where it can be assembled for less than 1000€ and be improved upon by the community.

Its design methodology is based on frugal science and open source models, realized by a multidisciplinary team made up of scientists, artists, makers, designers and researchers in the humanities.